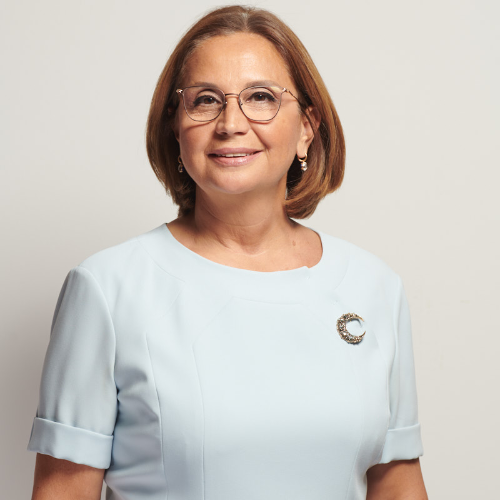 A lawyer by profession, she is a Board Member of Erdem Holding since 1985 and served as a Chamber Counsel for Turkish Airlines between 1990 and 2017 until her retirement. She is the President of KAGIDER where she has been a Board Member since 2013. Successively, she worked as the President of Soroptimist International of Turkey (2008-2010), Board Member (2013-2017) and Vice President (2015-2017) of Soroptimist International of Europe and President of Soroptimist International Convention (2015.) She is the Vice President of SEDEFED, one of the founders of UNESCO-Istanbul Center for Global Ethics and Sustainable Development and a member of the Advisory Board of Association of Women Candidates. She is a member of UNESCO Turkish National Commission Gender Equality Monitoring Committee. She has also worked as the Assistant Coordinator of Istanbul Women’s Platform, and her other civil society memberships include International Federation of University Women and Foundation of Turkish Women in Legal Profession. She has been a spokesperson at several international meetings such as International Federation of University Women Conference (2013), 6th World Water Forum (2012) and Parliamentary Assembly of the Council of Europe Equality Commission Meeting (2009). She speaks French and English.