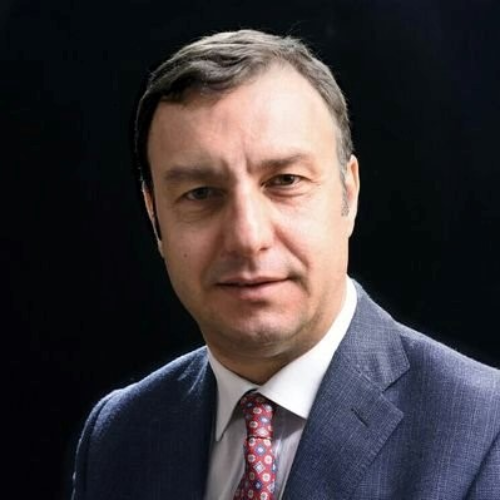 Minister of State for the Protection of Entrepreneurship

Eduard Shalsi was born in Korça on April 1, 1968. He is married with Ms. Era Shalsi and they have three children, Patrick, Samuel and Kler. Mr. Shalsi gratuated from Faculty of Natural Sciences, Biology and Chemistry, University of Tirana, in 1990. Mr. Shalsi has gone through a complete cycle of qualifications, in and out of the country. During the period from 1996-2002, he has tought numerous seminars and training on Banking issues such as Deposits, Import-Export, Credit, Accounting, Business Card. Mr. Eduard Shalsi was the Chairman of Committee of Productive Activities, Trade and Environment, in the Parliament of Albania (2017-2019), also former Minister of State for Local Government and Anticorruption Issues, during 2017. In 2003, after 7 years in the banking sector, became CEO of Insurance Institute SA (INSIG SA), the first insurance company of Albania, and a year later appointed firstly as Chief of Staff of Edi Rama, (at that time, Mayor of Tirana) and after in 2007 came into office as Deputy Mayor of Tirana, period during which he led some important projects for the capital. Has been elected MP in the district of Tirana in 2009, also in District of Berat in 2013 and has been active in parliamentary life. Actually is elected MP in the 2017 elections, but this time in the district of Korca. As MP, is also in charge as Member of the Parliamentary Assembly of the Council of Europe and Member of the EU-Albania Association-Stabilization Commission. Mr. Eduard Shalsi was appointed Minister of State for Protection of Entrepreneurship on January 2019. Minister Shalsi speaks three foreign languages: English, Italian and Greek. In 2016, Mr. Shalsi is also elected President of the Albanian Chess Federation.